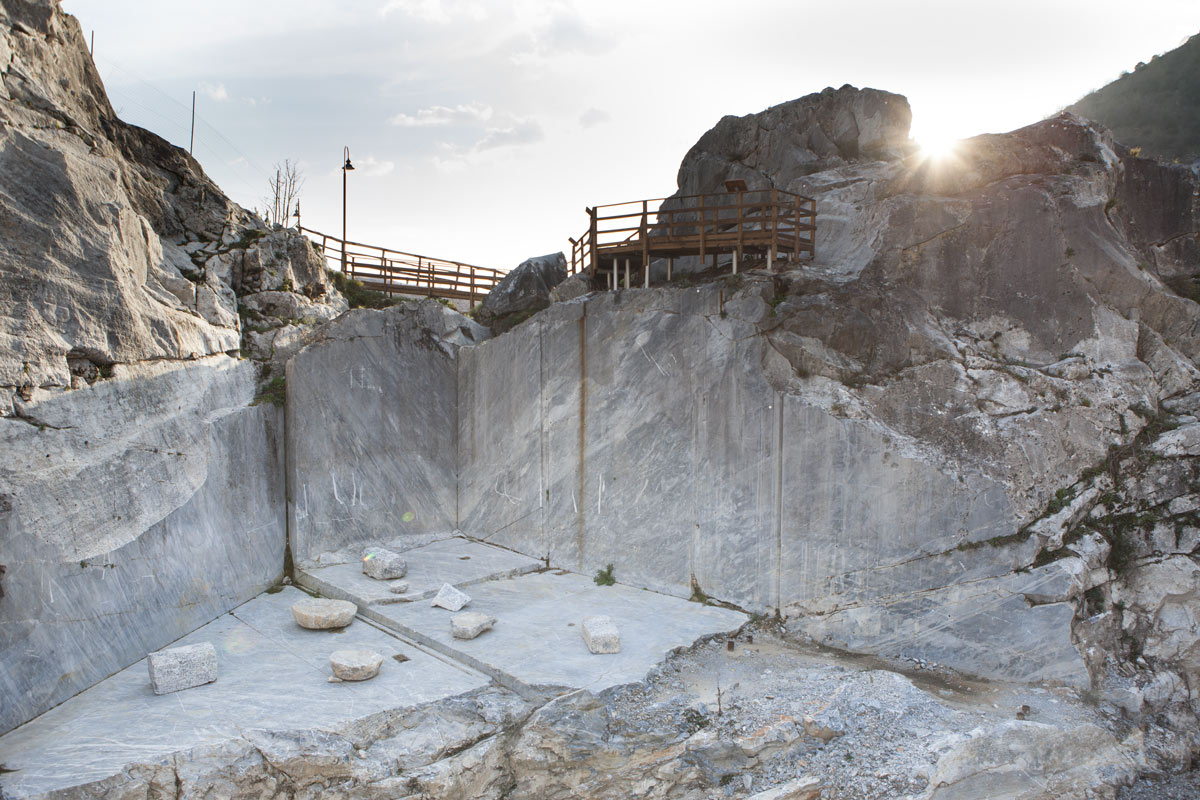 Every part of the territory of the Apuan Alps is characterised by the presence of immense veins of a precious marble, which is famous all over the world and whose mining, according to historical testimonies, dates back to at least 155 BC. That is the date of creation of the first monument made of marble from Polvaccio, area close to Torano basin (which is part of the Carrione Valley together with the Miseglia and Colonnata basins). It was a gravestone over a base dedicated to Marco Marcello, the consul who finally defeated the Liguri-Apuani people, and it was found among the ruins of Luni. Thus, it can be said that the origins of marble mining and processing dates back to the Romanisation of the Apuan area.

Pliny, in his Naturalis Historia, writes that the first who “advertised” the beauty of Apuan marble was Mamurra, Prefect of Engineers at the service of Julius Caesar. Strabo declares that after 48 BC the richest dwells of Rome and its surroundings and the main monuments were made of Luni marble: the Pantheon, the Pyramid of Cestius, the Porticus Octavia, the Temple of Apollo Palatinus, the Temple of Concord, the Arch of Claudius, the Trajan’s Forum, the Trajan’s Column, the Temple of Jupiter, the Arch of Domitian, the Bridge over the Volturno.

Carrara quarries, over different historical ages, worked mainly for foreign clients who were drawn by Luni marble. A great portion of the Italian art history owes its centuries-old fame to the marble quarried in the Apuan Alps, starting from the many Christian buildings which were embellished with architectural decorations made of marble, speaking of which, we may mention, as far as Tuscany is concerned, the Baptistery of Florence, the Cathedral of Santa Maria del Fiore and Giotto’s Campanile, Santa Croce and Santa Maria Novella churches in Florence, the Collegiata of Empoli, the Cathedral and Baptistery of Pisa, the Cathedral of Siena. Carrara itself, right after 1000 AD, started the erection of its Cathedral by blending Lombardy and Tuscany elements and decorating everything with a glorious rose window of the finest quality.

Some documents testify to the great numbers of famous sculptors and architects that came to choose statuary marbles, leaving a trace of their art in the city: for example, Nicola Pisano, who came to Carrara in 1265 to choose the marble apt to the creation of the Pulpit of Siena Cathedral, and later Michelangelo – to his stays in Carrara the guidebook dedicates a specific chapter.

Over two millennia, from the origins until today, the marble production has undergone numerous changes in each of its phases: from mining, to transportation and processing techniques. Until the 16th century, the mining methodologies remained almost unaltered (they used the separation of bench walls through fracture, practised since the Roman age), until an event that started the first true industrial revolution: in the quarries of Carrara, in 1570, the gunpowder for mines was used for the first time. An event which thrilled the marquis Alberico I Cybo-Malaspina to the point of coining a celebration coin. The separation of the block of marble from the mountain proved to be rapid and economic in that way, but it caused detrimental cracks over time and it considerably increased the quantity of waste. In the 19th century, methods based on mines were still used, but those ones involved a larger and more spectacular separation (the “varata”) which however caused detrimental effects on the environment (in addition to a great waste of material).

In 1895, the helicoidal wire was experimented and later introduced with success in almost every quarry: the shattering of the block was avoided, the quantity of waste was reduced, the squaring of blocks was made easier and the quarry was kept efficient. The diamond wire appeared in the 70s of the 20th century instead.

In addition, still at the beginning of the 20th century, the block and waste material handling techniques were modified: modern electrical hoists that permitted the handling of large blocks in a fast and safe way and carts moving on little railways instead of wooden push-cart were introduced. The installation of an important plant which spread the use of electric power in 1910 made it easier the use of the various types of motors which integrated manpower.

As far as transportation is concerned, since Roman ages to some decades ago, the lizzatura was the method to move the blocks from the mining area to the quarry yard. There, until the first decades of the 20th century, the transportation was done with carts pulled by oxen that, exhausted by the enormous effort, sometimes died along the route. Once the blocks reached the coast, they were boarded on ships, which set sail from Luni in the Roman age: after 1000 AD, the blocks were firstly boarded on small boats in Avenza coast and then on ships which were offshore.

The small Medieval landing of Avenza was busy with ships which differed in size, origin and capacity, and which represented the various naval fleets, the local one included: the ships transported marbles along the Tyrrhenian Sea, from Sicily to Genoa.

For centuries, the transportation of marble blocks from the quarry to the coast and their loading on ships represented a problem which limited the development of mining activities, for the high costs mainly.

The idea of a port in Marina D’Avenza, which became later Marina di Carrara, dates back to the second half of the 18th century. Marina D’Avenza was chosen because the advancing of the coast line phenomenon had to be taken into account. Furthermore, it is from that period too that the planting of maquis dates. It extended from Avenza to the beach, to defend the new cultivated lands from the effects of Libeccio wind. The project of the port was not realised, though: only a loading bridge was installed in the 19th century.

The inauguration of Ferrovia Marmifera (Marble Railway) dates back to 1876 and it gradually replaced the transportation by oxen. Many years were needed to find a system to replace the lizzatura instead: after WWII, the Marble Railway was dismantled and roads towards marble basins were built, giving tyred vehicles the possibility of loading the blocks directly in the quarries and of carrying those into the processing facilities.

The infrastructure which was essential for the development of Apuan marble industry is the port of Marina di Carrara indeed, whose construction started in 1921. Several shipping lines work with the Apuan port: lines connected to Northern Europe nations, the Iberian Peninsula, Canada, Brazil, South Africa, China and India, the main countries in which marble is imported as a rough material.

Moreover, as for the organisation of a quarry and the places where marble was processed in the past, many changes can be noticed. During the Middle Ages, skilled workers from Pisa, Florence, Siena and Orvieto settled in the Apuan quarries to export our marbles to be used in the great endeavours of their cities. The birth of the first entrepreneur artisans of Carrara marble sprang from this phenomenon.

In the middle of the 15th century, quarries were organised in a worker corporation, whose name was “Ars Marmoris”: the associates dealt with all the phases of marble mining and processing, as well as its trade. Almost a century is needed for the first art workshops to appear on the scene, though. Among them, the most famous one was the workshop founded by Bartolomé Ordoñez (Burgos, 1480 – Carrara, 1520), one of the most important Iberian sculptors of the Renaissance, he arrived in Carrara in 1519 to create works of art ordered by the Spanish Crown. In the workshops, everybody had their specific tasks: beside the master, we could find sculptors, stone-cutters, polishers and many other workers dedicated to different jobs.

If the attraction towards the great cultural centres, such as Rome and Naples, had Carrara artists move or stay for long periods in those cities (there had never been a proper local school in the city), there were moments in which sculptors had the desire to create in their hometown places in which establishing their traditions: after periods away from their city to learn and better their techniques, many Carrara people went back to Carrara to settle definitely with their workshops.

At the end of the 18th century, the Accademia di Belle Arti was born in order to stimulate the local processing of marble. The artisan workshops were connected to it and a strong growth of these occurred during the Napoleonic age.

Generally, important artworks by famous artists and architects were ordered to the workshops managed by marble families, because specialised artisans worked there with seriousness and competence and the job was divided, fragmented, according to the skills of each of them, in order to have pieces of extraordinary quality.

With the 20th century, the number of workshops decreased, but the number of employed workers in each of them increased on the other hand. Modern machines were introduced and the shops started to appear more industrial-like, up to this day, when the few ones which have remained are connected to stone sawing factories.

Industrialisation and new technologies born thanks to computer science have not been able to cancel those workshops that have a long and well-established tradition and still today they are the guardians of thousand-year old knowledge, training generations of young artists and producing sculptures that will be sent all across the world.