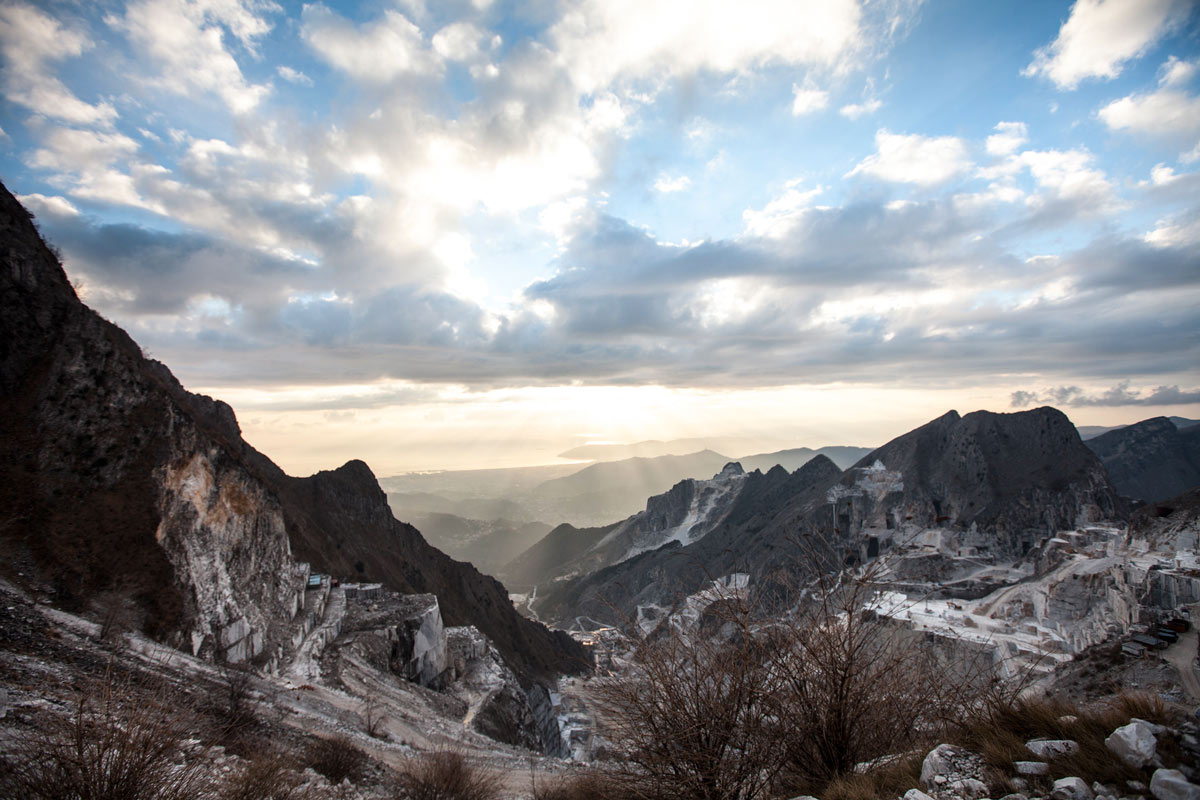 The great Michelangelo Buonarroti (Caprese, 1475 – Rome, 1564), though he did not leave any of his works of art in Carrara, always had a close relationship with the town, staying there many times to visit the quarries and choose personally the marbles which gave life to his masterpieces: in Piazza del Duomo (Cathedral square), on the façade of the house where he lived during one of his stays, there are his bust and a plaque which reminds of his presence in Carrara.

His first stay dates back to autumn 1497: the then twenty-two years old Michelangelo reached Carrara on horseback to procure the marbles necessary to sculpt the Pietà ordered by the French Cardinal Jean de Bilhères-Lagraulas. Despite the fact that weather conditions were not ideal to work in the quarries (during winter, temperature are very low at heights and quarries are often covered with snow), the operations were carried out without any particular problem and the supplier of Michelangelo, Matteo Cuccarello, had Michelangelo find the marbles mined in the Polvaccio quarry ready to be transported in February. Yet, the blocks reached Rome only at the beginning of the summer for reasons, in the light of current knowledge, unknown (though it has been supposed that there had been bureaucratic problems). In August, Michelangelo signed the contract with the Cardinal for the creation of one of the most famous masterpieces of world art.

After his first experience, Michelangelo came to Carrara other times to obtain the marble used in his works. There were several reasons which had the artist go personally to Carrara: among them, the scarce availability of quality marble in Florence and Rome (the sculptor had had terrible experiences with the material bought in Florence) and the consequent opportunity of having a wider range of material compared to the one offered by the cities away from the quarries; the will of knowing the material more in depth, by being in contact with the workers who lived thanks to the marble (spending time with quarrymen, the artist was able to fill his gaps in terms of marble knowledge, as he had always worked on already rough-hewed blocks until the moment he started the Pietà). For these reasons, Michelangelo considered these first phases of material choosing as an essential part of the creation of his masterpieces.

According to documents and biographies, we know that Michelangelo was back in Carrara for the second time in 1503, when the Opera del Duomo di Firenze commissioned him to make the statues of the apostles, and again in the spring of 1505, right after the order of the funerary monument of Pope Julius II, which would have become the most difficult endeavour of his career and life (his very famous Moses is part of that monument and it was made of Apuan marble). The new experiences in the quarries were done during the hot season: on the occasion of his 1505 stay (which lasted for eight months, a lapse sufficient for the artist to rough-hew the marbles in Carrara, where he stayed until the autumn), Michelangelo arranged the transportation directly with some ship owners from Lavagna (the vessels that were used for the marble transportation from Avenza were almost exclusively from Liguria).

Furthermore, for the quarrymen the opportunity of having Michelangelo in Carrara meant having an exceptional customer, since the quantities he ordered were always conspicuous, due to the impressive artistic pieces he was asked to carry out.

The artist went back to Carrara in 1516, though he traded continuously with his suppliers in each previous year, also thanks to the help of trusted people. Yet, the period had changed: Julius II died and the sepulchral monument was very far from being completed, as much as his heir, Francesco Maria Della Rovere, duke of Urbino, compelled the sculptor to conclude the work in seven years at maximum (a deadline which was not met in the end). In addition, Michelangelo had to fight harshly with the new Pope Leo X (born Giovanni de’ Medici), who pressed the artist to use the marble of Pietrasanta quarries (under the domain of the Medici family) rather than Carrara one. But the artist did not want to leave Carrara, not only because on the Apuan coast he had created a long-time network of relationships, but also because Pietrasanta quarries had not been exploited yet, and starting that (with all that entailed: finding the sites, training the workers, creating the transportation routes) was rather a heavy task Michelangelo did not want to undertake.

During his 1516 stay, started in September, the artist rented a house (a sign he wanted to stop in the town for a long period), the one in the Cathedral square on which the bust and plaque can be found today, and he started to negotiate, as usual, with quarrymen. But in December he received a letter from Rome in which he was accused of favouring Carrara marbles to the detriment of Versilia ones, although the Roman Curia expressly asked him to use the quarries of Seravezza. Yet, not only did Michelangelo not worry about the accusations from the papal state, but he kept on working promptly in Carrara (where he stayed until August 1517) and he founded, together with a Carrara quarryman, Leonardo Cagione, a company which was destined to start the exploitation of a new quarry, with the double purpose of making the marble provision easier and earning money from the supplies: they would have shared both expenses and earnings. Michelangelo had for a moment the advantage of the situation, since his persistence had the Medici family granted him the freedom to choose whether to buy the marble from Carrara or Seravezza for the project of the new façade of the church of San Lorenzo in Florence (which was never ended). Yet, a series of rifts with the owners of Carrara quarries (mainly due to non-fulfilments and delivery delays, but Michelangelo also accused the quarrymen of having spread malicious rumours about him), and some tension with the marquis of Massa, Antonio Alberico II Malaspina, forced him to leave Carrara and get his supply of marbles in the new quarries of Seravezza.

The relationship with Carrara, however, did not finish. Michelangelo went back to the Apuan coast in 1519, after the easing of tensions with some suppliers: in Seravezza, what is more, the artist faced several difficulties especially due to the very mediocre skills of local workers (so much so he had to teach them), and, after sending his complaints to the Pope, he was answered he could get the marbles for San Lorenzo in Carrara.

Michelangelo went back to Carrara for the last time in 1521, to choose the marbles for the new Medici commission, the Sagrestia Nuova, whereas the last contact with Carrara we know of occured in 1523: then, the artist did not go personally to the town, but he sent a friend of his, as well as a trusted collaborator, the stone-cutter Domenico da Settignano, known as “Topolino”, who had followed him several times to the Apuan quarries and that, on that occasion, looked after the mining of the blocks on his behalf, continuously sending letters to Michelangelo to inform him about how the operations proceeded. From the letters exchanged with various correspondents we know that, through the help of Topolino, Michelangelo kept on having relationships with Carrara until 1525: after that year, for different reasons (political changes, new projects, aging), he did not feel the need anymore to negotiate directly with Carrara people to obtain the marble.

The relationships with Carrara lasted for almost thirty years: they were often tense and strenuous relationships, which did not benefit from the famously complicated nature of the artist and the rude and proud one of the Apuan quarrymen. But in the collective mind, Michelangelo and Carrara appear as two “entities” which are indissolubly connected, and still today, by watching the great masterpieces the artist has left to mankind, it is evocative to think of the sculptor while he undertakes his tiring journeys towards Carrara, climbs among thousand of difficulties to the peaks of the mountains defying the quarry roads and the adverse weather conditions, toils, sweats and swears together with the quarrymen, negotiates with them often losing his temper, follows each phase of the operations and observes with satisfaction the output of his genius in the end.